Once in a while, people ask old Pa Pitt, “What kind of camera do you use?”

The answer, of course, is complicated.

For practical reasons, Father Pitt has been using digital cameras exclusively for a while now. He would very much like to go back to film, and some day he will, when he has the time. The business of developing the film on the kitchen counter and then scanning the negatives takes a big chunk out of the day, whereas a digital camera takes a picture that can be instantly published.

What Father Pitt has really always wanted is a Kodak Pony with a digital back. The Pony was a simple but well-made camera with no light meter and no rangefinder, so that the photographer had to use his own brain to set the exposure and focus. Old Pa Pitt has gone looking for digital cameras that come closest to replicating that experience—that is, digital cameras that will actually allow him to set the exposure and the focus himself.

Those are harder to find than you might think, especially if you want to pay less than $300. Why? It seems that that market has told camera makers not to offer manual settings in inexpensive cameras—even though it makes no difference in the cost. Manual options used to be much more common, but the market told the camera makers, “Take those horrid things away. They make us feel stupid.” Look on line at user reviews of older cameras: you’ll see many users giving them bad reviews specifically because those options exist.

But digital cameras have been around long enough now that old ones are very cheap. Father Pitt’s very favorite camera came from an on-line auction: it cost him 99¢ plus shipping. He has not spent much more for most of his other cameras. If a camera would cost him more than $20, shipping included, he usually rejects it.

Canon PowerShot S45. Perhaps the closest old Pa Pitt has come to his ideal of a Kodak Pony with a digital back. It has complete manual control of everything, and it will save pictures in raw mode, like an expensive DSLR. The lens is pretty good for a small camera. The only disadvantages are that it is a little bigger than most pocket cameras, and it uses a Compact Flash card rather than the nearly universal SD Card.

Fujifilm FinePix 2650. Father Pitt’s first digital camera, a simpleminded brick that takes very good pictures (at 2-megapixel resolution), if you forgive strong barrel distortion at the wide-angle end. He does not really use it much anymore, but it still works after twelve years of abuse, which is surprising.

Kodak EasyShare Z1485 IS. The Kodak name was poison in the digital-camera market, for no very good reason other than snobbishness. It still is, which means that you can get this camera used much cheaper than other brands with similar features.

This is a pocket camera that’s a bit thicker than most pocket cameras, but it justifies the thickness with extra features. Most important is complete manual control, although photographers will be surprised to learn that there is no aperture-priority or shutter-priority mode—only full manual. At 14 megapixels, it compares favorably in resolution with current digital cameras (the difference between 14 and 16 megapixels is tiny), although Father Pitt does wish it would save its pictures with a little less compression. It takes good movies as well.

This camera has quirks: among others, it eats through batteries quickly, and you can easily outrun the buffer if you shoot several pictures in a row. But its versatility makes it the one camera Father Pitt carries if he has room for only one camera that must fit in the pocket. One can almost always coax a good picture out of it.

It’s one of the ironies of photographic history that Kodak, which invented many of the technologies used in digital cameras today, was unable to survive as a maker of digital cameras. (In the case of this camera, at least, stupid marketing didn’t help: the camera was sold—for close to $400—with a rechargeable battery and no charger, according to many negative on-line reviews. You had to buy the charger separately. Father Pitt bought the camera used with the charger for about $10, so he didn’t have that frustration.) This was one of the last cameras Kodak sold, and by this time the manufacturing had been outsourced. There are still Kodak cameras being produced now, but they are simply cameras from another company that has licensed the “Kodak” name.

Konica-Minolta DiMAGE Z3. “DiMAGE” is a stupid name, but this is Father Pitt’s favorite camera: it cost him 99¢ plus shipping, and it was worth every penny. Complete manual control, a long zoom, and extraordinary speed are among its virtues; and Father Pitt is in awe of its sophisticated mechanical image-stabilization system. He has taken clear hand-held pictures with a half-second exposure. If you are a photographer, chances are pretty good that you simply don’t believe that statement, but old Pa Pitt gives you his word. If you are not a photographer, you will have to take old Pa Pitt’s word for it that a half-second is absurdly long for a hand-held picture. (All the pictures for this article, except for the picture of the DiMAGE itself, were taken with this camera, hand-held, with no flash, at shutter speeds of 1/6 or 1/8 second.) Finally, with no auxiliary lenses, the camera can focus down to less than half an inch. The tiniest flowers can nearly fill the frame.

This camera also has its quirks, and old Pa Pitt would not have you think he recommends it to everyone unreservedly. The camera eats batteries while it’s turned off—but, on the other hand, a fresh set of batteries will take hundreds of pictures, perhaps more than a thousand. The colors have a noticeable shift toward the red, but old Pa Pitt corrects that easily in the GIMP. At any speed higher than ISO 50, there is noticeable noise in the pictures; at ISO 400 the noise is unbearably ugly. But the image stabilization makes it much less necessary to use higher speeds. Father Pitt almost always leaves the camera set to ISO 50.

There is a movie mode as well. The resolution is standard American TV resolution, which is pretty good but not spectacular; but the macro capability of the lens can be used in movies as well, making this the only one of Father Pitt’s cameras suitable for filming the adventures of tiny insects.

Olympus E-20n. Though it has a fixed lens, this is a true DSLR, with an optical viewfinder that uses an unusual prism system to bounce the light into your eye, rather than the usual mirrors. In the hand it feels more like old Pa Pitt’s much-loved Olympus OM-1 than any other digital camera he has, and its manual focus is actually manipulated by a focus ring on the lens, rather than through awkward menus and buttons. There are options within options, and the user interface is unnecessarily complex; but once you have the camera set up the way you want it, it’s very much like an old film SLR. The one glaring problem is the speed: there’s room for four pictures in the buffer, and then you have to wait, and wait, and wait, while the camera writes data on a big chunky Compact Flash card. But the pictures are gorgeous. This is one camera old Pa Pitt actually spent $50 on, and it was worth it. It was originally a $2,000 camera, so you can argue that $50 was quite a bargain. And it looks like a “professional” camera. If it is necessary to establish credibility as a photographer, this thing hanging on one’s neck will do it; then one can slip in any old cheap camera on the plea that one likes to have a backup.

Panasonic Lumix DMC-S3. This is a cheap pocket camera that has one remarkable virtue: a wide-angle lens with almost no distortion at the wide end. It’s about equivalent to a 28mm lens on a 35mm camera, where most cheap zoom lenses are about equivalent to a 35mm lens on a 35mm camera—and most of those lenses show pretty bad barrel distortion at the wide end. (You can see that distortion in some of the pictures on this site, from the time before old Pa Pitt started to put the extra effort into correcting the distortion with the GIMP.) Otherwise, there’s not much to recommend it over any other pocket camera, but that wide-angle lens is very useful for taking pictures of buildings in the narrow streets of Pittsburgh.

Samsung Digimax V4. This is absolutely the slowest digital camera old Pa Pitt has ever used. If he were a sports photographer, he would have left this in the Dumpster behind the stadium, after having pounded it with a brick to show it what he thought of its performance. But since his interest is mostly in things that stand still, he finds his patience rewarded. It fits in the pocket (a bit lumpily); it has a Schneider Kreuznach lens that sees the world clearly; it allows complete manual control of everything; and it can save in uncompressed TIFF format, if you are willing to wait about half a minute between pictures.

This is the quirkiest camera in the bunch by a long shot (so to speak). Besides its glacial speed, it has a distressing ability to overheat itself if it is left on for fifteen minutes or so. If it does, it will simply die, lens extended, and nothing will turn it on or off. Taking the batteries out and putting them back in does not help. But if you take out the batteries and take the camera to a cool, dark room where soothing music is playing, and let it rest on a soft cushion for an hour, then you can put the batteries back in and it will miraculously revive itself.

It is also the only camera on the list whose pictures will not work with the Hugin panorama software. Why not? Father Pitt thinks it may be some curious anomaly in the EXIF data this camera generates.

And yet, with all that, it was still not a very popular camera. Go figure. 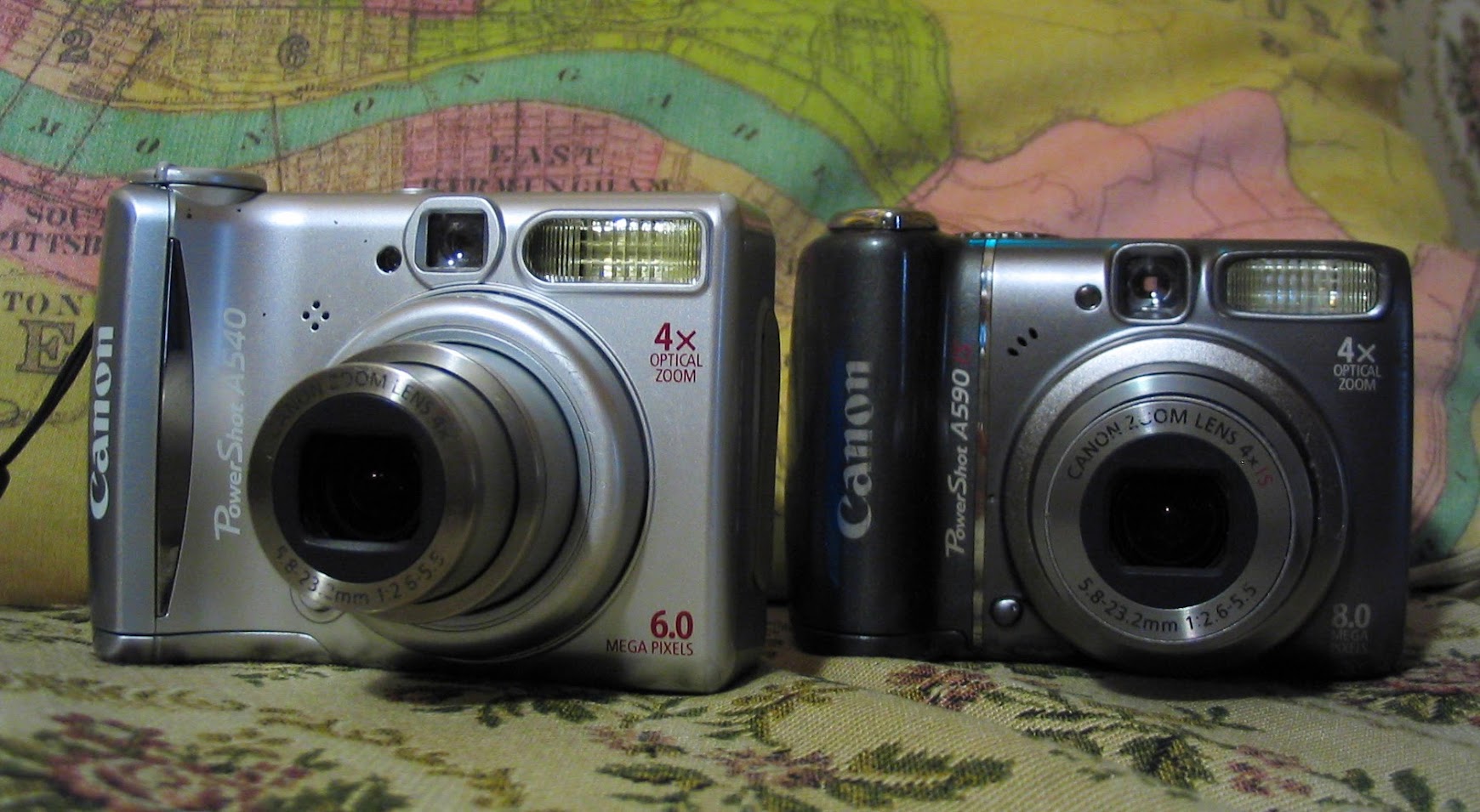 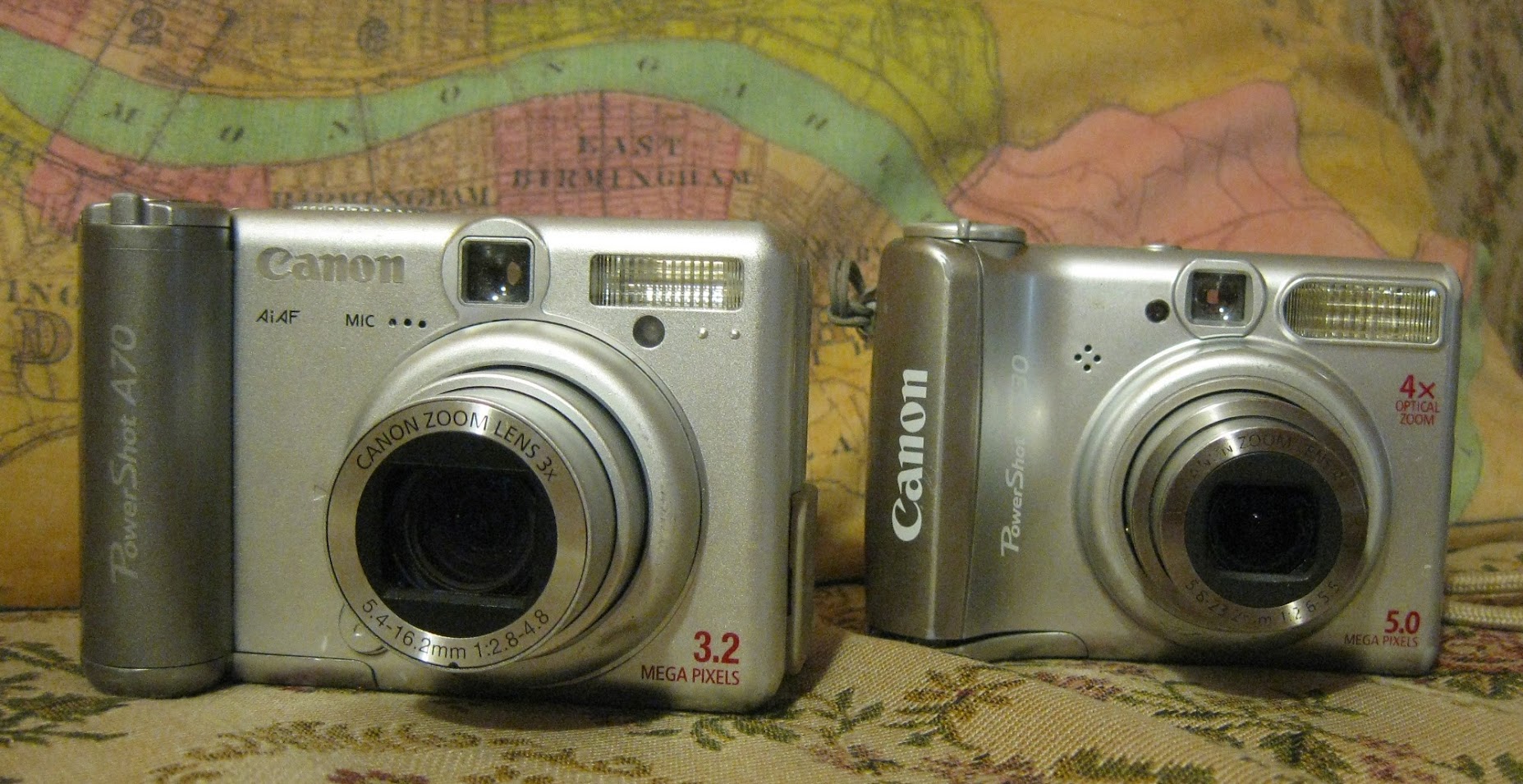 Canon PowerShot A Series. When old Pa Pitt heard about the Canon Hack Development Kit, he decided to see what kind of transformation could be wrought upon a little pocket camera. He really wanted only one to play with, but these cameras all came in a box together from an on-line auction. All but the earliest one—the PowerShot A70—have ready-made CHDK software downloads waiting for them.

Just as they come, these are unusually well-specified for pocket cameras. They allow complete manual control of everything, and the pictures are about as good as you can get from a little camera like these.

But CHDK, which you install simply by copying it to an SD card and sticking the card in the camera, adds raw support (in DNG format) and an incredible variety of capabilities, even beyond what you would ordinarily find in many DSLR cameras. Yes, your DSLR has better and more expensive lenses. But can it play Tetris?

3 thoughts on “About the Cameras”